A Call for Working Together to Enact the Chernobyl Law in Japan
By
Masami Ueno
(Director of Fukushima-Iseshima Association)
Fukushima-Isehima Association is a Non-Profit Organization located in Mie Prefecture in Japan. We have been helping the evacuees (be it forced or volunteered) from Fukushima to settle in Mie Prefecture and providing the children of Fukushima with recuperation programs in Mie since March 2011. We also send fresh vegetables to families in Fukushima.
Our activities mentioned above have been supported by generous donations and grants. However, after six years have passed, we have realized that what private organizations—like ours—can do is limited. Yet, our activities are still necessary for many people since radiation continues to be released into the air every day as the result of the Fukushima nuclear disaster. Then, the question is how we can tackle with such an unprecedented scale of disaster. To be honest, we are at a loss. However, there are two important precedents we should follow.
The first instance is the Chernobyl Law that was established by the government of the former Soviet Union for the people affected by the 1986 Chernobyl nuclear disaster in order to protect their lives and health from radiation. The Chernobyl Law is also the first law in the world that manifests the universal human rights to the life of the people affected by the radiation disaster. We believe that Japan must enact the law equivalent to the Chernobyl Law.
Another instance is Japan’s Freedom of Information Law that was established by the government of Japan in 1999. This law was the product of the accumulated efforts made by the citizens all over Japan; those citizens requested their own local governments and members of the city councils to enact the Freedom of Information Law at the municipal levels. This citizen movement eventually led to the enactment of this law at the national level. We can establish Japan’s Chernobyl Law by following this history and experience of the civil actions that eventually realized the Freedom of Information Law in Japan.
We would like to work together with many of you toward the enactment of Japan’s Chernobyl Law in order to protect our health and lives from the radiation disaster.
Please take a moment to read the following. We hope that you support our idea and join our effort to establish Japan’s Chernobyl Law.
Five years after the Chernobyl nuclear accident, the so-called “Chernobyl Law” was established by the former Soviet Union; it was then succeeded by the governments of Ukraine, Russia and Belarus after the dissolvement of the Soviets.
All these governments have guaranteed the right to evacuation for the residents living in the contaminated areas by radiation, while providing the people living in the areas to which the evacuation orders were issued with the social security. The three countries are not necessarily in a sound economic situation; consequently, they are not able to fulfill all the compensations stimulated by the law. Nonetheless, the Chernobyl Law is still significant for human history as it identifies the government as the primary responsible for the nuclear disaster and guarantees the unconditional right to evacuation for the residents living in areas where one’s exposure to radiation would exceed 1 mSv/year.

On the other hand, the Japanese government raised the standard of public dose limit for radiation exposure from 1 mSv to 20 mSv per year after the Fukushima nuclear accident, and continues to maintain the same dose limit as the safety standard, which turns to be the criteria for the government to lift the evacuation order today.
Furthermore, the Fukushima Health Management Survey Committee has renounced the possibility of causal relation between the increasing number of thyroid cancers among the Fukushima children and radiation, and has never taken a drastic measurement for the health problems among the residents of Fukushima.
Japan’s radiation risk management policy considerably differs from that of the three former USSR countries, which set up 1 mSv/ year as the public dose limit for radiation exposure and provide the social security for the people who are diagnosed as a possible victim of the radiological consequences of the Chernobyl nuclear accident.
Immediately after the Chernobyl nuclear accident, the government of the former Soviet Union raised the standard of the public dose for radiation exposure from 1 mSv to 100 mSv/year; and some experts insisted that 100 mSv/year was ‘safe’ even around the period where the Chernobyl Law was being established. However, the public dose limit was reversed to 1mSv/year, which is the international standard, because the nuclear power plant workers, who had dealt with the accident, fiercely opposed to the government’s policy of 100 mSv as the post-Chernobyl public dose limit.
We, the citizens in Japan, too, experienced the nuclear catastrophe that reminded us of the dignity of life.
We must speak out and take actions in order to establish Japan’s Chernobyl Law.
May 2017
Please contact us if you like to work with us to draft a model plan and formulate a procedure to enact the law at the municipal level. The below is our contacts:
Email: ueno_masami_1108※yahoo.co.jp（Masami Ueno）
noam※m6.dion.ne.jp（Toshio Yanagihara）
（Please convert ※ to @ ）

Words under the clock:”Harmony between people and the environment   Attractive city Koriyama” Tons of black “flecon bags” – a Japanese cont... 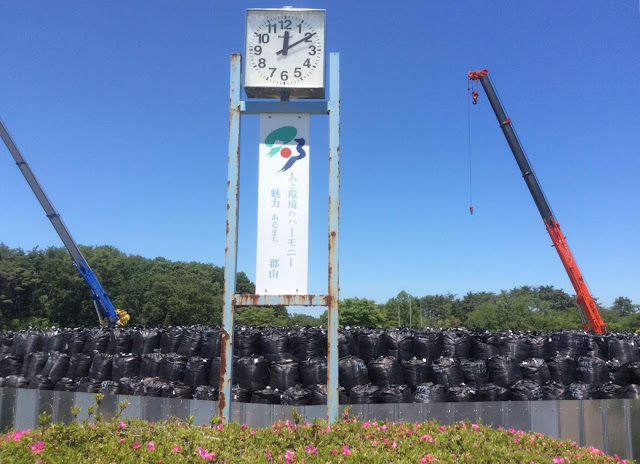